Roosje Klap
I am Roosje Klap, I am a designer and I am from the Netherlands. I have prepared a presentation for you about something that I do besides my studio practice and that is my position as co-head of Graphic Design together with Niels Schrader in the Royal Academy of Art in The Hague. The speech that I would like to give to you today is called “Involved Design”.

We think that design addresses communication problems, and for us it is a platform for debate and dialogue. Therefore, we think that it is very important to learn how to question. That is for us one of the properties of what is the driving force behind the design process. Decomposing the design challenge by asking more and more questions will bring you closer to the essence and the more thorough your research, the higher the quality of the design solution. One of the examples we often use in our education is a work by the American artist James Lee Byars, because he said the perfect thought must take the form of a question, and he believed that one does not get further with answers and explanations but believed that the question is at the heart of knowledge. He says “I can answer the question, but am I bright enough to ask it ?». He had this project called The World Question Centre, where he asked 100 of the world’s most brilliant minds of his time what they considered urgent for themselves. I have some examples here :

“What is knowledge ?” by Sarat Maharaj

“Why is it so difficult to make useful mistakes ?” by Hans Ulrich Obrist

“What could be the task of art today ?” by Marina Abramovic

“Can we wake up ?” by Daniel Buren

If you are deep in the ocean and you cut your finger, the blood will appear blue, not red. Why ?

Then one from the Dutch artist Mark Manders, “Is it possible not to have a question ?”

So in our department we believe that questions are at the core of the language of learning, because we also feel that design is like scientific research, interpolation allows us to create more and more accurate understanding of the unknown. Interpolation is the calculation of unknown values, the larger the number of questions the more accurate the resulting image becomes, so we think that by asking questions you refine and redefine your answers. The resulting design will be more accurate, more precise and more thoughtful.

KABK, the Royal Academy of Arts in The Hague is the oldest academy in the Netherlands. It was founded in 1682 and we have in our Graphic Design department alone around 200 students. We teach in English because more than 50 % of our students are from international backgrounds, with 26 nationalities in total. Our society is very important to us and this is why it is at the top of our list of focus areas, Society and Ethics then Theory and Research, hence the questions, Technology and Coding, Type Design and Typography and Entrepreneurship, and Innovation.

One of the things we do for instance is that we organize project weeks and invite guest artists. This week is called the Trip tribunal for uncertain objects and we talked for example about Immaterial Witnesses. It is a very complicated term, so we thought that it would be nice to ask a question too : “can you bring an iceberg to court ?” as an immaterial witness.

I think it is nice, if we think about the previous lecture for those of us who were here. One thing that is very important for us is to consider coding as one of the new crafts. We think that it is really important to learn how to code because the clash between analogue and digital media is not really a clash, but a quickly developing symbiosis. So we play between the different forms of media and we use them together in unexpected ways. This means that our students learn how to program. All of them, starting from the first year, they learn processing, CSS, html, java script and python, arduino – they learn all of these things and that is quite something special in our school. Maybe I should also say that we use a lot of open source software and our students program their own work. They do not use Photoshop, they write their own programs. What they do is something very original and specific. We have a very big tradition of typefaces and creating typography. You can imagine that the drawing of type that is done in my school, both in digital and analogue, also results, when combined with coding, in very playful things.

The next thing that I think is very important to say is that we really try to enhance corporation collaboration and sharing of projects, because I can tell you a lot of things as a teacher but I think you will learn more from your peers. We travel a lot. For instance, last week I took some of my students, just 42 of them, to the Balkans region and we travelled through Serbia, Kosovo and Macedonia to really see what is going on there, and to visit all of the monuments too. Just before that, we went to Morocco and we travelled in the Sahara desert together with a nomadic family to learn more about the folkloric experiments in this country. It is important because it is part of our theoretical approach towards learning, and it is important to enhance all of these things to become a socially cohesive group.

“You’ve got it, you show it” is also something important to know. You have to be able to present your work, not only to talk about it but also to write about it and to show it in exhibitions. Therefore, we organize many exhibitions, which can be quite difficult, especially for graphic design. People make books for instance but that is not necessarily an object for presentation. A book is made to be read, maybe to be held but not necessarily as an exhibition object. That is something that is interesting to think about : how do you show a book ? How do you talk about a book ?

Perhaps the most important thing is that we think in the Royal Academy of Arts in The Hague that it’s important to create a safe place where you can make lots and lots of mistakes, where there’s freedom to discuss, to research, to discover and to learn from your tutors and your peers. I would like to end with one important manifesto that we use in our school. It is a manifesto of John Cage from 1967 and it is called 10 Rules for Students and Teachers : 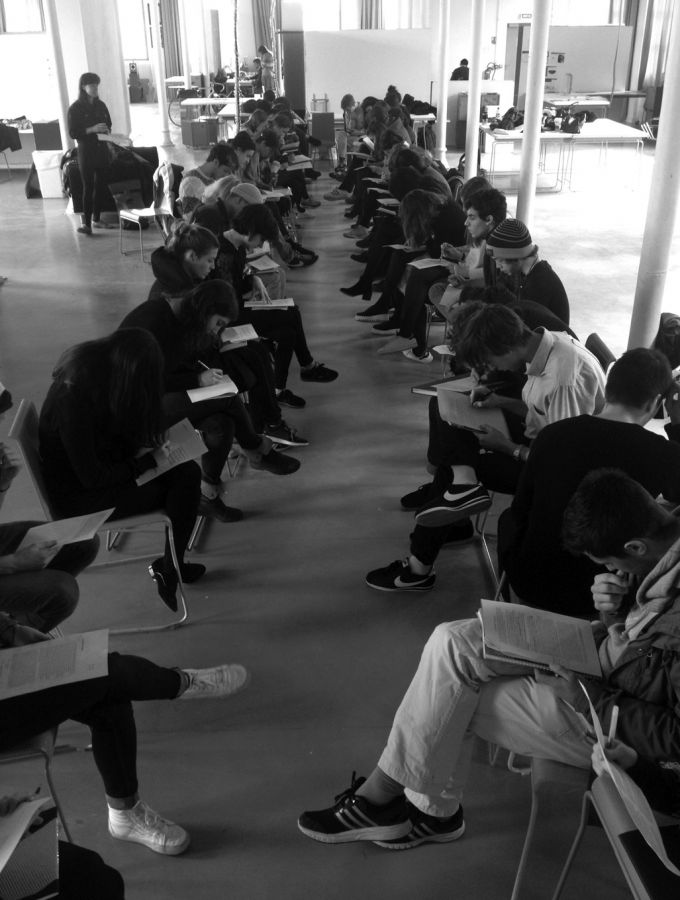